‘Professor van der Ainscow’ started Science Week 2022 with a STEM assembly for the children and staff. Mrs Zastron, our science lead had organised a series of exciting activities to observe and think about.

Ask if your child can remember what the letters of STEM stand for… (Science, Technology, Engineering and Mathematics).

In the assembly Professor van der Ainscow tried a few experiments. The first was to see how many balloons would be needed to make a bag float. The children considered what might be inside the balloons. Some children said ‘air’, but we talked about a special gas called ‘helium’. Thank you to Emily for being a great helper by adding the first few balloons.

As with any science experiment things can take an unexpected turn… The balloons escaped and floated up to the ceiling in the hall, causing a great deal of excitement! How long will it take for the balloons to come back down? Will they be down by Tuesday? Wednesday?

Next, the children saw a plastic zippy bag filled with water and some pencils. Professor Ainscow explained that the pencils were going to be pushed through the bag of water. What would happen? It was time for the children to make some predictions. Would the bag burst? Would we all get covered in water? Enci and Zara came out to help push very sharp pencils through the plastic bags. The children were all amazed to see that the water stayed in. Why? The science behind it is that the plastic bag is flexible and so could contract around the pencil just enough to keep the water safely inside.

Great science! This week the children will enjoy a wide range of experiments in and outside their classrooms. 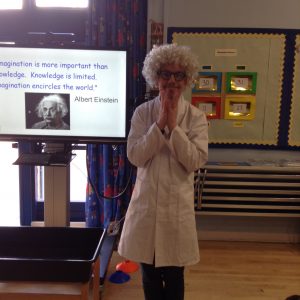 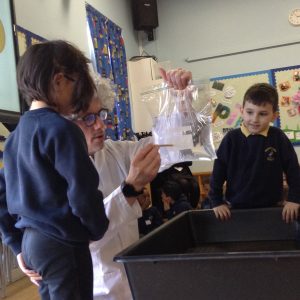 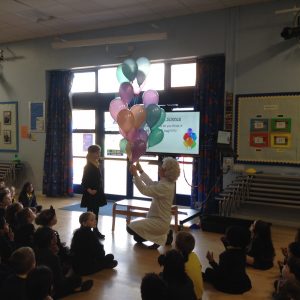 Back To Main News Page
We use cookies on our website to give you the most relevant experience by remembering your preferences and repeat visits. By clicking “Accept”, you consent to the use of cookies. Read Our Privacy Notice
Accept
Manage consent

This website uses cookies to improve your experience while you navigate through the website. Out of these, the cookies that are categorized as necessary are stored on your browser as they are essential for the working of basic functionalities of the website. We also use third-party cookies that help us analyze and understand how you use this website. These cookies will be stored in your browser only with your consent. You also have the option to opt-out of these cookies. But opting out of some of these cookies may affect your browsing experience.
Necessary Always Enabled
Necessary cookies are absolutely essential for the website to function properly. These cookies ensure basic functionalities and security features of the website, anonymously.
Functional
Functional cookies help to perform certain functionalities like sharing the content of the website on social media platforms, collect feedbacks, and other third-party features.
Performance
Performance cookies are used to understand and analyze the key performance indexes of the website which helps in delivering a better user experience for the visitors.
Analytics
Analytical cookies are used to understand how visitors interact with the website. These cookies help provide information on metrics the number of visitors, bounce rate, traffic source, etc.
Advertisement
Advertisement cookies are used to provide visitors with relevant ads and marketing campaigns. These cookies track visitors across websites and collect information to provide customized ads.
Others
Other uncategorized cookies are those that are being analyzed and have not been classified into a category as yet.
SAVE & ACCEPT